As we made our way through the Alps from the east to the west, we stayed in Rawyl and Medji for some sport climbing. Alex enjoyed some nice sunny days in and around the shade of the van curing her gastric flue wheras poor Jack Geldard, Madeleine Cope and me had to climb some nice gneiss cracks in awesome Medji. Life is tough.

After a few days Jack and Madeleine left to go and enjoy some sun back home in Chamonix and Céuse, but Alex and I could not just leave. We had flipped through the Valais Mountain Guidebooks and with the good weather period we had, we had to go and climb some of the valleys mountains. As there had been so much hot weather it was obvious to us to try and do some of the “rock climbing faces.” When we realized that we could link up Obergabelhorn and Zinalrothorn in one trip and even use a bivvy in the first night we were psyched!!

So we planned and packed for the next few days up in the mountains and drove the way to Täsch. The famous Zermatt is a town with no cars allowed and which you can only access via taxi services or by train. Though we already had a stunning view on the Matterhorn we first had to get through the “annoying bit.” We parked the car in Täsch at a Taxi Service Station only a bit after the place-name sign which was cheaper than the one next to the train station. Lucky us, this guys Taxi Service just came by a few minutes later and – zack – there we were right in town with all our gear packed in two pretty heavy backpacks. Zermatt is unique (in a special way) as mountaineers who come back, those who go up, ordinary tourist, luxury tourists, the locals and many more interesting characters rush through. 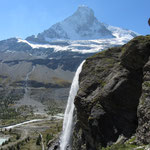 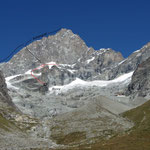 From the Church in the back of town you can either turn right a bit uphill or go along the valleys floor (signs for Schönbiel hut). We turned right and followed the path uphill. It is sayed that the view is nicer up there, but definitely you also lose a few more drops of sweat up the slope. So with the majestic Matterhorn North face to our left we approached the artificial reservoirs at the base of the Zmutt glacier where you turn right and are able to see the Obergabelhorn South Face. Pretty rocky, dry and good looking, wuhu! After an hour’s break we went on along the moraine ridge before you cross over to the rocks underneath the bivvy. Some marks and cables lead to the shack. You must be joking! It is a wonderful hut with lots of beds, a big sitting table, three big gas stoves and a fountain in front of the door. The best thing about it? With the toilette door open you enjoyed a stunning view down the steep valley shadowed by the Matterhorn North Face. Pretty romantic. 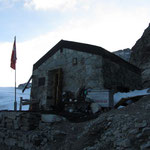 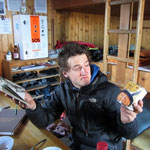 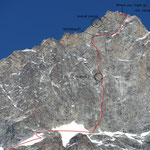 We shared the hut with four other very friendly climbers who went for the “Arben-ridgeline.” We even got a good description from their guidebook for our climb – thanks for that! We enjoyed getting up as last party – the approach is only one hour and you don’t want to climb in the dark – and left at quarter past 5. After the steep slope we put the rack on and started climbing. You tend slightly right at the beginning till you get on the central ramp and then head straight up. There is a obvious feature in the middle of the wall that you pass and a pinnacle next to the summit that kind of guide your way. But in general there is probably no right or wrong. Just go with the flow. The rock quality is superb, not much loose stuff and even with big shoes good to go. The Matterhorn North Face changes its colour with the morning light. Right after the feature we manovered ourselves into a pretty slabby bit and climbing got a bit steeper, so we put on rock shoes. As you get up higher you go left and around the “Headwall” to get onto the “Kohleband” by some chimneys or dihedrals around the corner. On the “Kohleband” we put back on our heavy shoes and went for the snowy couloir. We ended up having some delicate climbing onto the ridgline in almost mixed terrain, so you might just stay on the left side. After about 60 m from the “Kohleband” a obvious ledge on the left indicates the exit to the top. A last 2 m chimney and we stood on the top. With a great blue sky, a welcome relief, three hours to the top - what a climb. 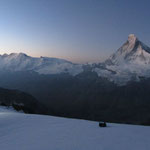 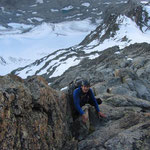 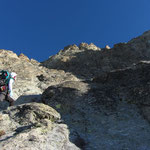 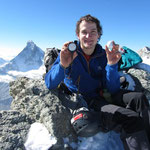 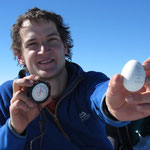 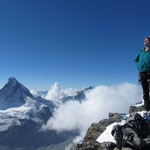 Back down was a bit of a pain with lots of snow and ice, so  we lowered each other of. A exposed ridgeline, a bit of two moves – but good ones! – climbing over the gendarme and a last slope lead us on top of “Wellenkuppe” (which is a pretty cool name for a lovely mountain. This mountain would be one of the most fancy ones if it were located in the eastern alps). We scrambled down its NorthEast Ridge and missed the right junction ending up in a snow-dirty-loose rock gully (of course we did) before we got onto the glacier that leads you to the Rothorn hut in a big curve. 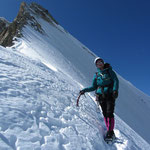 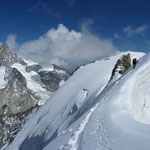 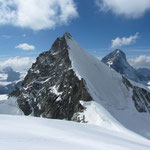 After a cold night in the hut we got up as the worlds fastest breakfasters stumbled out of the hut - only 10 minutes after they left the dormitory - still chewing down some bred, attaching crampons to their shoes, preparing some ropes and putting a harness on – all at the same time!. Amazing performance at 4 clock in the night: Elicited a laugh for us, something that they were obviously short of. After some delicious milk powder cereals we followed the lights ahead of us.

After traversing the glacier/snowslope you get to a obvious couloir that gets you on the next plateu. You traverse back left with gaining only little height to scramble up some loose and sandy rock to get onto the next level. As we had started in thick clouds all our worries “cleared up”, when we walked up the steep ice slope towards the ridgeline where we broke through the clouds. Hard to tell why, but I was cheering and smiling – soooo cool. 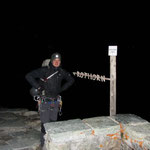 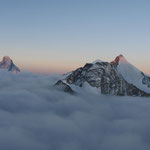 Underneath the shoulder we left the ordinary route and tryed to find the “Kanzelgrat” which is actually a faceclimb, not a ridge. Some scrambling/good climbing led us on top of a big block underneath a snowy couloir. On the end of this on the left side is a chimney followed by another chimney where we started to belay each other. A pitch later we got into a big corner/dihedral with a fixed wire and some good looking cracks. We put on climbing shoes and head on towards the ridge. From there you go left on top of a small ledge with the crux chimney (one old piton with a sling) on the left. After the chimney a ramp led me on top of the “Rothorngrat” ridgeline. It is said climbing a mountain is senseless, but there you are high up on a high quality rock mountain face following a bit vague but cool line to the top: I would say preeetttyy sweet. We finished the most wonderful ridgeline to the summit.

We followed the ordinary route back on the ridge and down the main couloir onto the track we came up earlier. Back at the hut we made soup, relaxed a bit and walked back down to Zermatt. Oh my god! 2600 m from the top to the bottom of the valley. So finally that’s what the magic of 4000 m mountains is about. Longer and higher walk ins and less elevation on the summit day. 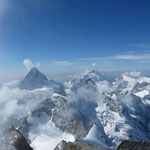 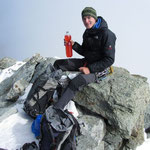 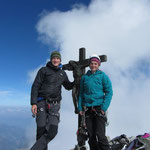 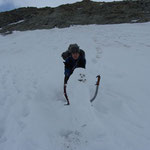 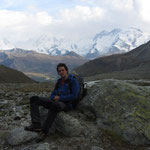 - Do not underestimate the walk in! All in all it took us 6 h. (light approach shoes?!)

- Bivvy Hut with three gas stoves, and a fully equipped "kitchen." There is water from the glacier in front of the hut. But you might want to boil it.

- Very little gear in situ. Belays have to be selfmade along the whole route.

- Climbing shoes are not heavy to carry and very comfortable on some bits.

- The Rothornhut did not mind that we brought our own food - thumbs up! Water in the hut from the glacier: They do boil it. There is a winter "bungalow" as well!

- Very little gear in situ. Belays have to be selfmade along the whole route.