On a trip to munich for making some progress on our Hollywood Schwigel Productions New Zealand movie-clip we found some spare time to head for the Alps. And yet, the schedule was close, so we didnt want to bother with multi-day missions but looked for a nice one day mountaineering adventure.

We  planned on the "Zillertal" and looked through the guidebooks for whats there. We came up with some ideas, but it was only after a call with a friend - a super motivated alpinist - who said that he and his partner just plan to go for one of the routes we had also picked, that we decided to join them on the following day.

By the time we arrived in the 'Zillergrund' they were already back down and asleep in their car - fair enough, as we experienced a day later!

"Stunning, amazing rock und great climbing with a snowy quick descent" was their resumee: What more can you ask for? So we packed our stuff and went to sleep for a (as usual) short night. 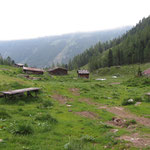 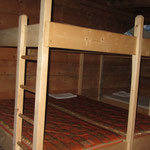 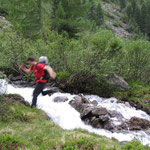 One and a half hours after we started from our cars back down in the Zillergrund we walked into the "Bodenalm", the first waypoint and also starting point for those who want to divide the 1350Hm approach into two. In contrast to the bad reputation the accomodation there gets, it looked pretty and cosy to us. With those who are lucky, a nice bivvy shelter with a great view on the ridge in sunset colouring maybe?

However we didnt see any ridge at all, as clouds were still filling up most of the valleys floor. 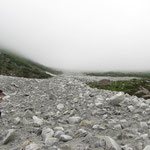 From "Bodenalm" you walk along a faint track along the side of the glacier streams. When the glacier/brook bed does a obvious bend/turn, the track goes round it in a wider circle before you head for a gap in an old stone wall. From there we crossed a few mor smaller streams (which might not be there anymore later in the season) and then traversed onto the back of the rocky glacier moraine.

The so called "original track"  turns of right at some point zick-zacking up through some steeper grasy slopes which neither we nor our friends could find. Probably the track is very faint or not existing anymore?

Nontheless, our friends told us they went up the 2nd big steep gully right of the base of the ridge. As fog was still in place we were blind flying, missed that other gully by miles (of course we did!) and walked up a smaller gully further to the right: Wich however was not much of a hassle either. Once your are up in the upper cirque, you traverse left on rock fields and snow slopes towards the base of the ridge (one mountaineering axe was convient as we only wore trainers but very likely later in the season this is a nice grasy walk in and you might laugh about this hint if you brought an ice axe with you). 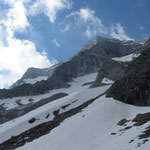 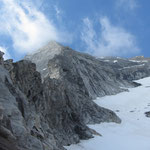 Once you get to the base of the ridge it gets pretty obvious where to start. We scrambled up the first bit until we got to the first check point, a splittered big rock which you traverse around on the right side. After that the climbing starts and we made a break for our second breakfast and racking up. 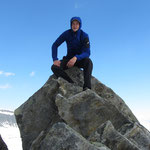 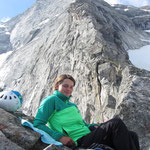 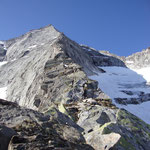 The first few meters are pretty intimidating right away: A very narrow ridge with a airy downclimb. After that stay on top of the ridge for the next pitch. But once you got the ackward start done the fun starts! Amazing granite rock quality with soft rounded cracks all over! Good friction and a gentle slope make the climbing feel safe. For very confident climbers it might be worth to simul-climb with 30m rope in between them, but its not easy to tell when you would rather pitch.  So most of the time we made super long pitches (60m -130m) until the rope drag was to heavy or we found an wonderful belay spot. Most of the climbing is smooth and steady except for the "obvious" features which are as followed (there is always quite a lot of normal pitches in between!). The crux is a faceclimb over a bigger step which you zig-zag through along a few pitons (around 6+ or 6a). Then there is a airy corner system on the left side which is not to hard, but watch your barn door! The next big block is passed by on the right side. Threre is a funny corner/chimney pitch on the right side and then from there you just cruise along the slappy cracks towards the top where it eases of and therefore also gets a bit chossier. Dont drop one of the very big rocks! 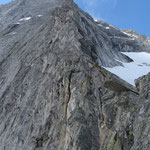 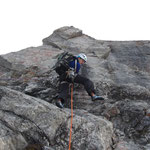 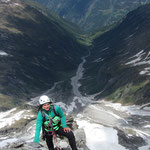 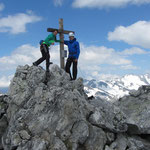 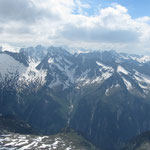 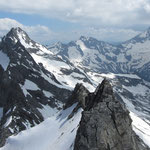 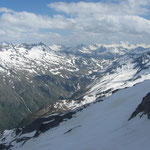 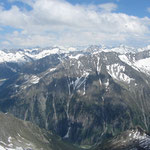 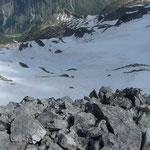 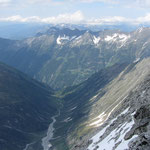 Once on the top, another 50-60m get you to the summit cross with an ammazing view over the smaller and higher mountains of Zillertal and beyond. Big thumbs up if you can name them all!!!

For the way down: Go back along the ridge for about 20 m and scramble down towards a few cairns. One abseil brings you down into the "Kainzenkar." From there you head down the Kar and aim for the 2nd valley/aisle from left. From there you go along the right side of the valley (looking down) avoiding the waterfalls and the big drop to get a path down wich you can see at the far end of the right side almost facing back.

In the ground floor of the valley routefinding gets a bit nasty, as a massive avalanche created quite a mess. However, we crossed the first stream and walked in the middle of the valleys floor until the height of some old farming house ruins on the left side. From there you can see the beginning of the track back down on the very right side of the valley. We crossed the stream a bit higher up over old snow (no idea what this will look like later in the season ;) ). 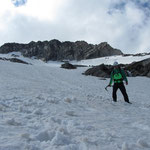 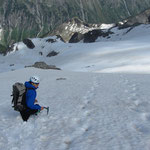 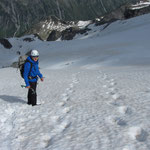 Back down you literally walk into the backyard of the "Jausenstation Kainzenalm." Hhhhhmmmmmm: How good a ice cold shandy can beeee =)

From there you either find a neigbour or local to give you a lift back out or enjoy the 45 min walk out of Sundergrund along some of the best boulder problems of "Zillertal." Back out on the road we got a lift right away back to our car 5 km down the road where Lukas and Benno waited for us - super nice!

Thanks again for the tip and a good dinner!

All in all, ridiculous good rock embedded in hell of a walk. A 'Pause' classic!

Here is a topo of the route: (But dont listen to their descriptions!)

otherwise we as always rely on the...

Belays have to be selfmade along the way. Don't underestimate the length of the ridge and the climbing! It took us about 5 hours but we didnt fuss around! A time of 6-7 hours of climbing by regular pitching is much more likely! Turning round is hardly possible or of same effort as climbing on, so make sure you have good weather! Enjoy rare, amazing rock! =)