Temperatures in August were just NOT North-Face like, so we decided to try a route called “Tempi Modernissimi” at Sasso Undici near passo Fedaia. The route gets the morning sun till 1 pm so we started early to do the one hour approach up a ski pist. Unfortunately the route was very dirty and unclimbed, the rock in the first two pitches is splintery with long reaches (maybe some holds broke off…) we tried to climb the first four pitches but the poor quality (and our own inability) discouraged us . We chalked the first crux pitch properly and watched Tobi Wolf (who arrived just when we reached the first belay) climbing it second go! Amazing! 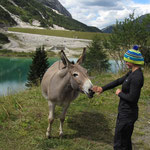 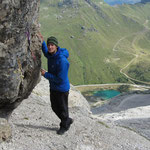 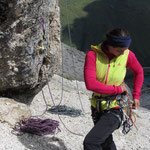 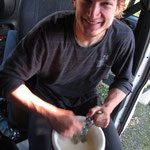 Tobi encouraged us to try a route called “C’est plus facile” at Croda da Lago near Passo Giau. The face is called Nuvolau and gets the sun till 2pm in the afternoon. It’s a hard, bolted multipitch route up to 10- in the 4th pitch, 8+/9- has to be climbed obligatory. Chrissi climbed the first 8+ pitch which turned out to be very pumpy and steep up a corner and technical to reach the first belay. I climbed the second pitch (8+/9-): a super technical pitch with pockets of all sizes and a balancy crux with fancy footwork. Chrissis turn again and he climbed the 3rd pitch (8) with a bouldery crux right after the last bolt. 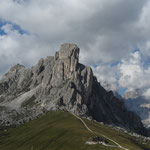 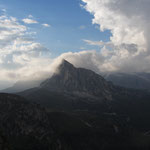 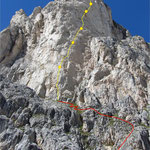 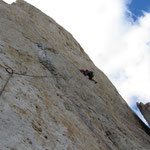 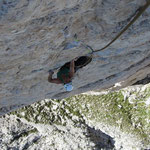 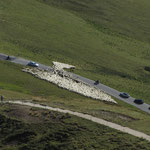 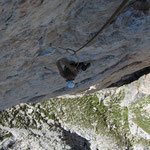 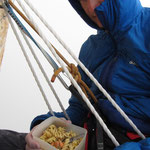 The 8a is the 4th pitch and has a defined crux in the middle with slopery sidepulls and bad feed followed by pumpy 15m. It took me an intense boulder session to figure out what to do. Basically you have to bring your foot very close to your left ear to stick the holds... The next 6c+ and 6c pitches are of very poor rock quality (zu gut Deusch: Voll der Bruchhaufen). Finally the last pitch is 7b+ and the climbing is really hard climbing BETWEEN the bolts, small gastons and single finger pocket. This is probably the pitch where you have to climb 7b between the bolts and its quite a nice one. Chrissi used a skyhook in a single finger pocket to protect the crux (the skyhook is definitely the new clipstick).

À propos new: It took us two days to work the route (first day we climbed up to the 8a pitch) and we both climbed it without a fall. So this is Chrissis FIRST 8A (seconding it!) but not an easy one, by the way. CONGRATULATIONS! 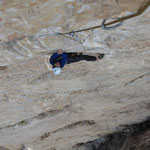 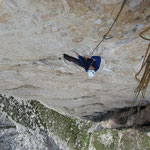 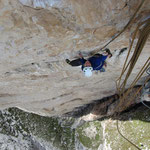 Approach: 20min. From Passo Giau follow the signs to Via Ferrata up a broad path with stairs. Then turn right on a small track towards the Via Ferrata and leave the path right underneath the yellow, overhanging wall. Scramble across the big boulders and climb up along fixed ropes to the base of the pillar.

We tried to climb the route to the right of "C'est plus facile" which is not in the guidebook but according to Tobias Wolf also 8a (the 3rd pitch) but we bailed as it got very cold and rainy. Back to the mountains, woopwoop! 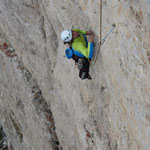 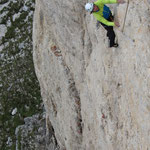 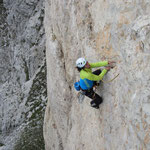 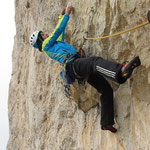 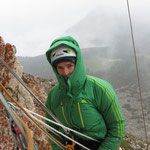